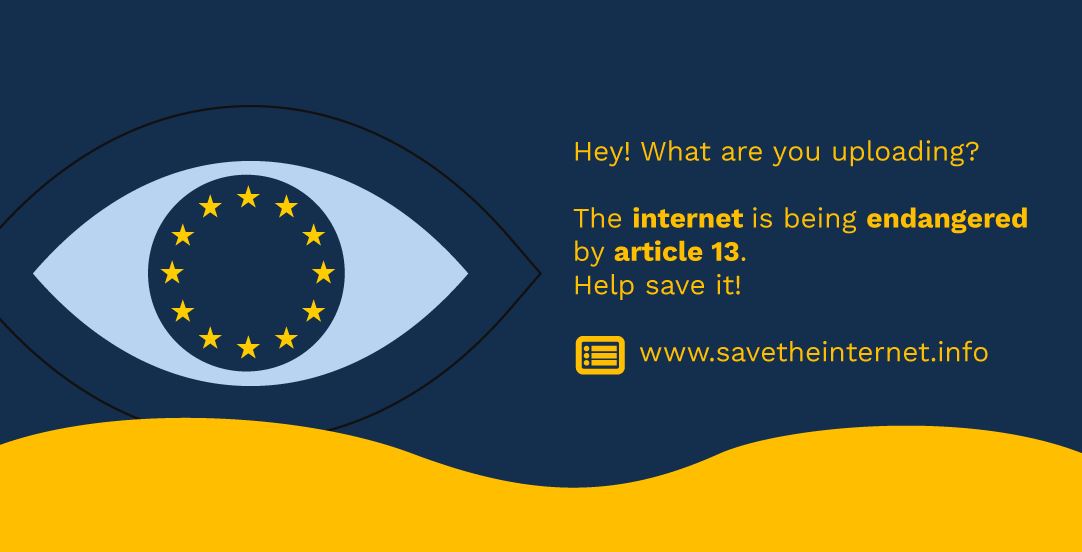 How to stop article 13? 5 things you can personally do to join the Article 13 protest

EU copyright directive, Article 13. Probably everyone already knows what it is, but just in case – it’s a copyright directive that wants to protect creators and their content. It does seem like a great thing, as unique content will be protected against mass copying. However, Article 13 is just a twisted definition of content ban, as the various material is going to be protected against copyright infringement. This means that any content that will have music, movie, video game content or any content will have to be filtered, or the uploaders of say, video game reviews will have to provide a license of the said material.

Parodies, reviews, overview videos and similar content that uses content created by someone else will most probably not pass the possible filters, therefore will not be reached. The Internet quickly gave Article 13 another name – “meme ban”, as most, jokingly at first, said that all memes will be banned due to this EU Article.

What will Article 13 do?

How does Article 13 affect the US and the EU?

Most Americans just shrug at the Article 13, as it doesn’t really concern them, while  the Europeans wait in terror for the Article 13 to pass. Though what it means to everyone is that certain content will not be available, a lot of content will be filtered or banned and most creators will probably stop creating content entirely. Have a favorite game reviewer who is European? Want to see dank memes on Reddit from Europe? Well, tough luck.

When will article 13 take effect?

Final Article 13 vote will take place in March/April, most likely March 25-28, April 4 or April 15-18. These are the dates when the Members of the European Parliament will have to vote. It’s already frightening how the Article 13 already reached the agreement and now just needs a final vote, however, there are still ways to stop it.

The best and the most direct way is to seek out your country’s representatives and contact them, encouraging them to vote against Article 13. A website dedicated to fight this strict copyright directive #SaveYourInternet has been extremely active and made a list of countries, their Members of the European Parliament and their voting behaviour based on similar directives. The SaveYourInternet not only gives you tips on how to write a respectful email as to why the said member should vote against Article 13, but also gives you an email draft and emails of the said representatives.

CreateRefresh is a website created to fight and stand against various restrictive filters. It encourages to join the creators across Europe and create as well as upload content, to show how it will impact their ability to document, parody, reference, mix content if the EU passes the copyright law. This movement is to defend creator right to create and inspire. Read more about CreateRefresh on their website.

Mostly, the protests against Article 13 take place in Germany, as this country is one of the most vocal against this copyright directive. The protests seem to attract a pretty big crowd and continue to rise in numbers as well as people joining them, making thousands to march in the streets. Europe-wide protests are planned to take place on 23rd of March (according to European Digital Rights) with maps showcasing the place of protests and where to gather in certain cities that are joining the protest.

Support those who are fighting against Article 13

Don’t let Article 13 limit or kill your online expression as well as creative freedom. Join the groups and movements against this restrictive copyright directive, support and encourage companies protesting this directive. Spread the word and raise awareness, as some still don’t understand the possible ramifications of Article 13. If Article 13 passed, it’s only a matter of time until even more restrictive copyright laws take place. It’s a step backwards that might not only ban memes, YouTube, Reddit, Twitch and more but also kill creative freedom and creative expression on the Internet.